Products that are as natural as possible

… because we trust in nature

Our product philosophy is based on 2 key beliefs:

Marine omega-3 fatty acids, in their most natural form, are found in fish. Therefore, the most natural way to consume omega-3s is to eat fish (at least if you ignore the heavy metal content of fish). 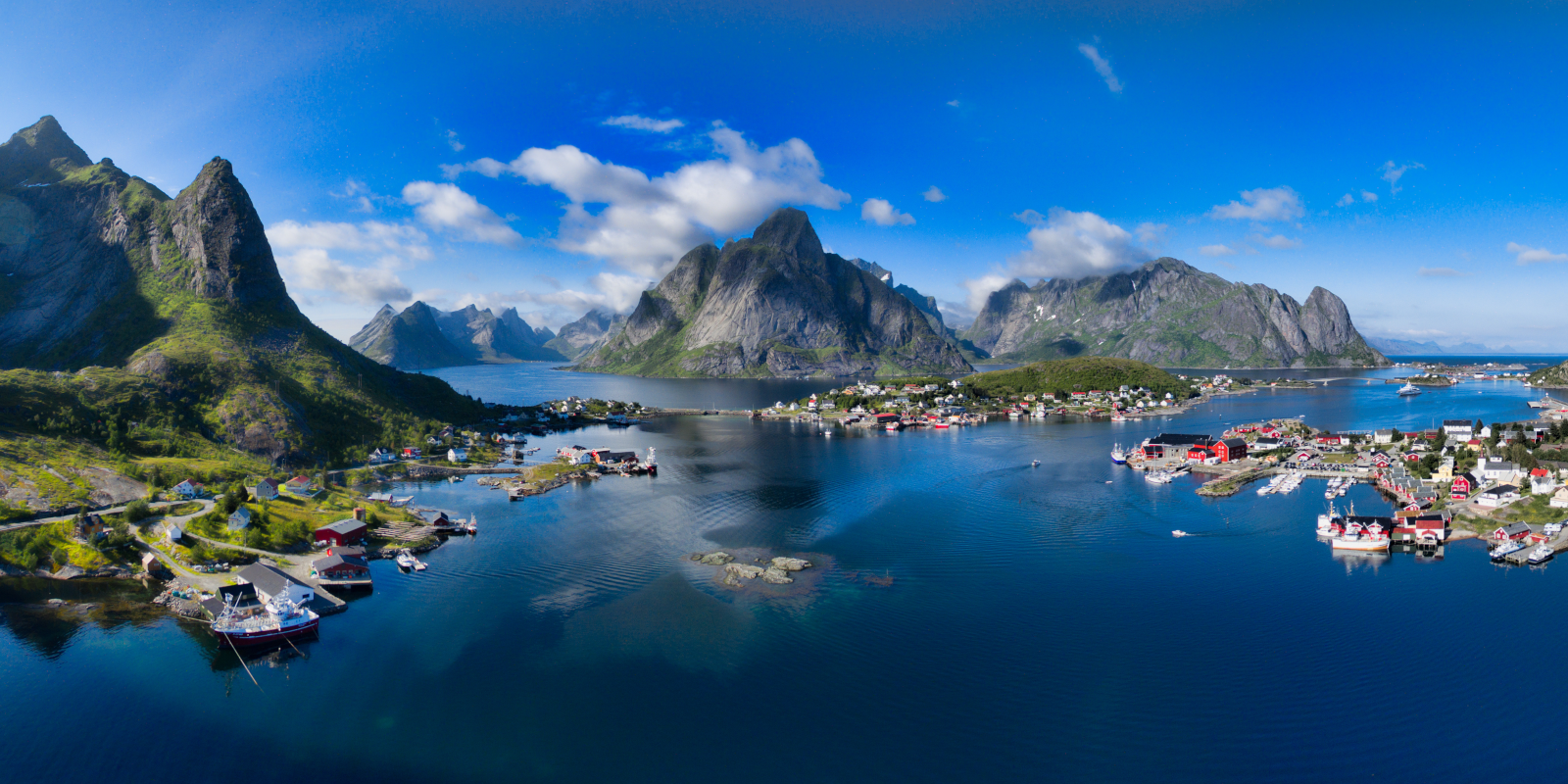 Using a fish oil is an attractive option to obtain sufficiant omega-3 fatty acids. On the one hand, because you avoid ingesting heavy metals (NORSAN fish oils are purified using a unique 3-step process that removes heavy metals, pollutants and PCBs). On the other hand, through eating fish alone it is hard to reach the required intake of marine omega-3 fatty acids.

As natural as possible – among other things, this means that our oil never comes from farmed fish.

The growing fish farming industry is a real problem, and not only for nature and the biotope of the Norwegian fjords. When we eat farmed fish, we also indirectly consume what the fish ingest through the food they are given, such as chemicals and antibiotics. In the belief that our food should be as natural as possible, we only use wild fish from sustainable fisheries for our omega-3 oils.

It is tempting to use an omega-3 concentrate in product development because these concentrates contain up to 90% omega-3. But this no longer has anything to do with what is found in nature, because in a concentrate, the natural fat structure is modified.

It is not yet known whether this form of modified fat poses any health risks.

In addition, chemically modifying omega-3 fatty acids makes them more unstable and thus increases the risk of oxidation, making them ineffective. We believe that nature provides the best answer. This is why, for example, we only use natural fish oils in our products, which are highly dosed but never concentrated.

As natural as possible – finally this means that we are concerned with the fact that during the fish oil purification process, secondary essential nutrients naturally present in the fish are removed.

Scientific work, including that of Professor Bjarne Østerrud from the University of Tromsø, has shown that extra virgin olive oil can partly replace some of the active ingredients removed during the purification process. The positive synergy between fish oil and olive oil has been confirmed in practice. That is why NORSAN’s flagship products Omega-3 Total and Omega-3 Vegan contain extra virgin olive oil. But not just any olive oil. We source our olive oil from an olive grower in Spain who works in strict compliance with organic standards. The advantage of this olive oil is that it has a high content of polyphenols. Polyphenols have a powerful antioxidant effect that will protect the omega-3 fatty acids from oxidation, not only in the bottle, but also and especially during their transport in the body via lipoproteins.

As natural as possible – this also means that our products contain only natural fish oils, i.e. not concentrated.

The use of fish liver (which also would count as fish waste) has proven to be a good method of producing a high quality cod liver oil. We therefore also offer an Arctic cod liver oil (product Omega-3 Arctic). What we expressly never use are fish oils obtained from other fish residues.

Fish and fish stocks are a limited and valuable resource. That is why we consider it our duty to focus on sustainable fishing and the responsible use of marine resources in the manufacture of our products. Our ethical duty is not limited to obtaining independent sustainability labels. NORSAN greatly appreciates being able to harvest the treasures of the sea and considers it its duty to behave and act responsibly.

The best quality fish oil is obtained by using whole fish. Our flagship product, Omega-3 Total, is obtained from small fish such as anchovies, mackerel and sardines. Our raw materials are sourced from suppliers with whom we have longstanding and close partnerships. This relationship of mutual trust allows us to be involved from the very beginning of the supply process.

Fish oils can also be obtained from various fish residues that have not found their way into the production of other products. We are sceptical about this method because we are convinced that high-quality fish oil can best be obtained from whole fish.

Algae oil as an alternative to fish oil

Algea oil is an interesting new source for marine omega-3 fatty acids (EPA and DHA), which has certain advantages over fish oil 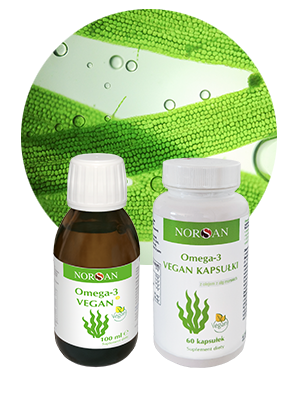 From these advantages NORSAN included in 2017 a high quality algae oil in our offering Omega-3 Vegan products.

NORSAN products must be easy-to-use and effective. We strive to use as few ingredients as possible in each of our products. In fact, ideally we would have liked there to be only one ingredient: 100% fish oil or 100% algea oil. Our Omega-3 Arktis product, for example, is composed of 100% cod liver oil, however for anti-oxidation purposes, we need to add some vitamin e.

Nevertheless, some ingredients have been added for a very specific purpose, as for example in our product Omega-3 Total :

A sufficient and beneficial dose

Opinions and recommendations regarding the right daily dose of omega-3 are divergent, ranging from about 0.3 grams (the equivalent of two regular capsules) to 4 or 5 grams per day. The right dosage actually depends on several individual factors such as dietary habits, the body’s capacity for absorption, weight, etc. This means that there is no right or wrong dosage, because the right or wrong dosage always depends on individual factors.

Blood tests can simply measure its omega-3 index and detect an omega-3 deficiency and provide the basis of suggested dose.

Analyses carried out on more than 10,000 of our clients have shown that it takes at least 2 grams of omega-3 fatty acids per day to regulate an omega-3 deficiency.

The measurement and analysis of fatty acids makes it possible to verify the effectiveness of the different sources of omega-3 and fatty acids. 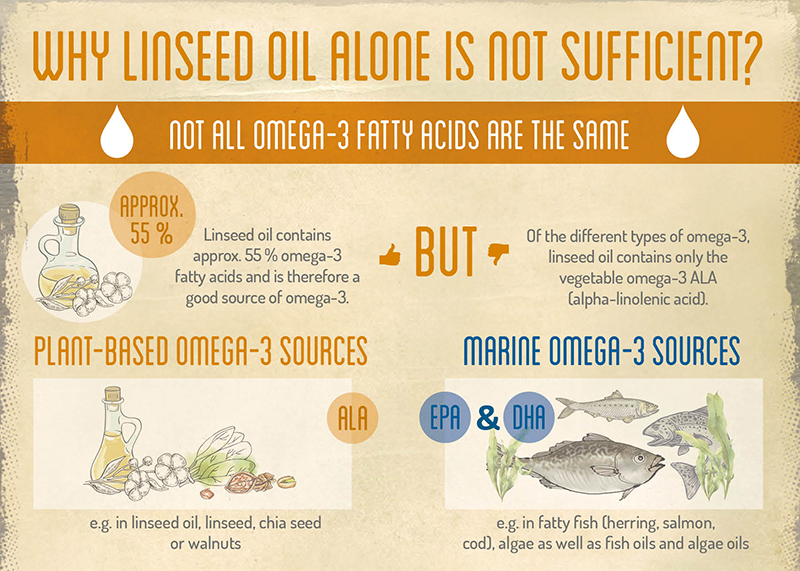 Why is flax seed oil alone not enough to regulate an omega-3 deficiency?

Flax seed oil contains more than 50% vegetable omega-3 in the form of alpha-linolenic acid (ALA). But it is mainly the long-chain marine omega-3 fatty acids EPA and DHA that are beneficial to health. And only a small amount of ALA can be converted into EPA and DHA in the body. Analyses confirm that the consumption of flax seed oil is insufficient to regulate a deficiency in omega-3 EPA and DHA.

The price must be transparent and accessible to the consumer. It is obvious that high-quality raw materials have a cost, but NORSAN strives to still keep its prices at a reasonable level. Our objective is to enable as many people as possible to benefit from a sufficient supply of omega-3. The price must therefore be consistent.

Here are the current prices per gram of omega-3 for the 3 main oils in the NORSAN range (effective May 2020):

Krill oil is a good omega-3 oil with a strong antioxidant. However, at the effective dosage of approximately 2 grams of omega-3 per day, the production costs of krill oil are quite high, which can lead to a price of EUR 200-300 per month for the consumer. In most cases, krill oil is recommended in a much lower dosage, which lowers the price but at the same time questions the effect. Thus, due to the high price, krill oil runs counter to NORSAN’s product philosophy.

Thank you for the trust