The effect of omega-3 fatty acids on our health

What are omega-3 fatty acids? 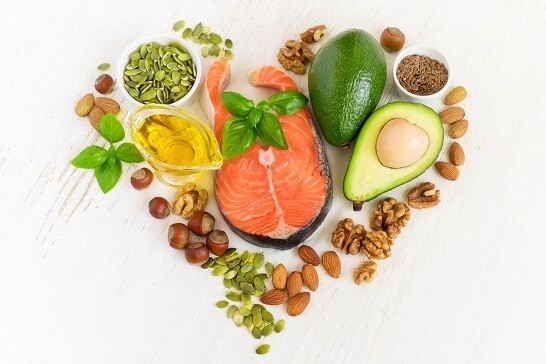 There are several types of omega-3 fatty acids. They differ mainly in their chemical structure and natural origin.

The most important omega-3 fatty acids are:

Main source for vegetable omega-3 fatty acid ALA (alpha-linolenic acid) are linseeds and nuts. Vegetable oil from linseed oil is particularly rich in ALA.

The difference between marine and vegetable omega-3 fatty acids

Not all omega-3s are the same!

Numerous studies confirm the health benefits of the marine omega-3 fatty acids EPA and DHA. Even if linseed oil is assumed positive for our health, substantial scientific evidence for the vegetable omega-3 fatty acid ALA is pending.

The body can convert ALA fatty acid to EPA and DHA omega-3 fatty acids, but the conversion rate varies greatly from person to person and depends on a variety of factors (such as age, gender, weight and metabolism). The average conversion rate is only 5-10%. 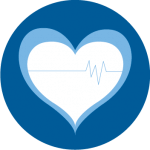 The heart is the central organ of the human body. Blood flow and cell metabolism are key factors in heart health. An adequate intake of omega-3 fatty acids has been shown to positively influence these factors.

EPA and DHA contribute to normal heart function. According to EFSA, the beneficial effects are felt with a daily intake of at least 250 mg of EPA and DHA. 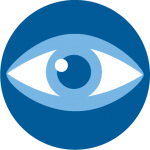 DHA helps maintain normal vision. According to EFSA, the beneficial effects are felt with a daily intake of at least 250 mg of DHA. 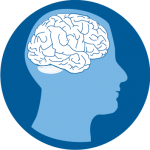 The brain is composed largely of unsaturated fatty acids. Recent studies show a positive correlation between the intake of omega-3 fatty acids and improved brain function.

DHA helps maintain normal brain function. According to EFSA, the beneficial effects are felt with a daily intake of at least 250 mg of DHA. 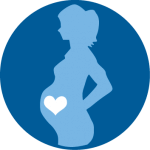 Maternal consumption of DHA contributes to the normal eye and brain development of the fetus and breastfed infant. According to EFSA, the beneficial effects are felt with at least 200 mg in addition to the recommended daily dose for an adult (i.e. at least 250 mg of DHA and EPA). 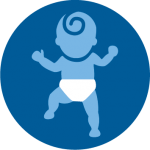 Infant consumption of DHA in follow-on formulas contributes to normal vision development up to 12 months of age. According to EFSA, the effect is beneficial as early as 100 mg of DHA daily intake. 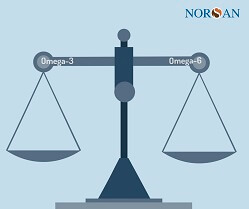 With our modern nutrition habits, omega-3s and omega-6s are out of balance.

Since the Stone Age, our diet has ensured a balance between the two fatty acids. Changes in our eating habits since the 1960s (consumption of processed foods and industrially prepared dishes, mass consumption of farm animals, increased use of cheap vegetable oils, etc.) have had a negative impact on the omega-6 / omega-3 ratio.

Today, the omega-6 to omega-3 ratio of the average population is about 15:1. This means that we ingest 15 times more omega-6 than omega-3! Young people under the age of 25 even have an average ratio of 25:1, which is not surprising if you look more closely. In fact, fish is rarely on the menu among young people, while fast food, ready meals and sweet and savoury snacks are on the rise.

What are the consequences of an excess of omega-6 fatty acids?

Omega-6 fatty acids are also part of the essential fatty acids and must therefore also be supplied to the body through the diet. However, most people today consume much more omega-6 fatty acids than omega-3 fatty acids in their diet.
Due to the inflammatory effect of omega-6, this imbalance in fatty acids can have a detrimental effect on health. Thus, experts believe that many of the diseases of civilisation such as heart attacks and strokes, but also asthma, rheumatism and atopic dermatitis, can be attributed to silent inflammations, which are caused by an excess of omega-6 fatty acids.

The high content of omega-6 in foods of animal origin is mainly due to the increased use of concentrated and cheap feeds in mass farming. Due to the high omega-6 content (more than 50%) of the soybean oil contained in soybean meal, we ingest a high dose of omega-6 via our daily diet. Because the omega-6s that farm animals ingest through their feed also end up on our plates later on.

In addition, sunflower oil, soybean oil and margarine used in many industrially produced foods are also high in omega-6. These vegetable oils are also used in cooking in many homes.


The best sources of omega-3 are fatty fish such as herring, mackerel, salmon, sardines or anchovies, and seaweed. Fish are rich in omega-3, but similar to us, their nutrition is important. For example, wild-caught fish contain a large amount of omega-3 because they feed mainly on algae, shrimp and small crabs. Farmed fish, on the other hand, are generally much lower in omega-3 because their diet consists mainly of industrial feeds, often based on soybeans.

Linseed oil, chia oil and walnut oil also contain a particularly high proportion of omega-3 fatty acids. However, this is the plant fatty acid ALA, which the body has difficulty converting into EPA and DHA. 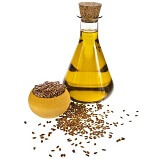 What is the right dose? 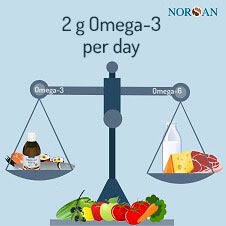 In order to compensate for an omega-3 deficiency and to rebalance its omega-6 / omega-3 ratio, it is recommended to consume 2,000 mg of omega-3 fatty acids per day. This has been demonstrated, on the one hand by numerous scientific studies, and on the other hand by the results of more than 10,000 individual analyses carried out in collaboration with Omegametrix®, the largest European laboratory specialising in the measurement of fatty acids.

Daily requirements for omega-3 can be met both through diet and by taking a natural dietary supplement. To obtain 2,000 mg of omega-3 per day, however, you would need to consume between 100 and 3,000 grams of oily fish per day, depending on the type of fish. Such a high consumption of fish is impossible for most people and is no longer recommended due to increasing pollution of the seas and oceans.

Regular consumption of quality omega-3 food supplements based on fish oil or seaweed oil, carefully purified and free of harmful substances, is therefore an excellent alternative. With NORSAN Omega-3 oils, for example, one spoonful per day is sufficient to cover the Omega-3 requirement of 2,000 mg.

And for a better efficiency, it is advisable at the same time to reduce the consumption of foods rich in omega-6. 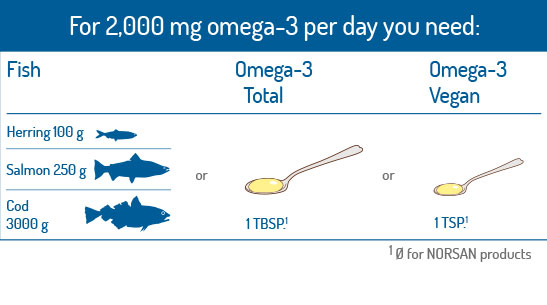